Cheated Out of Childhood: Introduction

Toddlers don’t know what they’re talking about. Several scientific and psychological studies have been done to show that children between the ages of 2 to 5 are not conscious of “right and wrong” or what the truth actually is. If you show a little girl or boy between these ages a toy and then remove it from the scene, then ask them if they saw it repeatedly, their answer may be consistent a couple of times, but then will change back and forth. So they might say “yes” when asked twice, but if asked a third time, they might say “no”, and then change their answer back to “yes” after a fourth time. There is no consistency. If another party is participating in this experiment and influencing the child’s answer in some way, this plays a huge role in their anticipated answer as well. And as a four year old, I didn’t know that I would be putting my father in jail for months by calling 911 and agreeing with my grandma that he had hit me when he hadn’t. I didn’t know right from wrong, at least not then, that early in life. But I knew what I had done much later and suffered the consequence ever since. That on top of realizing that I really was brainwashed by my own family to believe that a household full of abuse, neglect, hatred, discrimination, poverty, and selfishness was normal.

In Maria Ortese’s eyes, the author of an eccentric novel called The Iguana, hell is complete solitude. Evil is being ostracized and being neglected or abandoned by everyone. Hell is existing in the absence of love and affection and lacking the ability to communicate with anyone or anything, to listen and be listened to, to speak or be spoken to. I know this hell. To be trapped in my own home and only be yelled at or hit by parents who should have shown me appreciation, respect, and love. To go to school and be ostracized by my peers for no good reason. To go home, day after day, only to be locked up, confined to the same familiar, hideous walls, restricted in every manner, and have nothing but to resort to crying by myself in a corner, isolated and alone. I know this hell. This hell was my childhood. I was cheated out of a decent one.

This is not a mandatory project or an obligation. But it’s something that’s important to me and one of my primary goals in life. To share my story, because it’s a good one. It’s a different one, and very different at that, or so I’ve been told. And I believe it is highly necessary to jot it all down and share it with the world, because if I don’t, then I’m not allowing others to see the unusual life I’ve lived and relate to it or learn from it in the ways that I have.

I remember sitting in her green SUV one day, getting driven to officially move into my dorm and begin college life, and my aunt said to me “You know this is going to be different, right? Things are going to have to change. You’re not gonna get woken up anymore, or get your laundry done, by your foster mom or whoever did it. You’ll have to take charge of those things yourself.” I looked at her with the most baffled, cynical expression ever and smirked. “Um, I’ve never had those things done for me to begin with, Auntie. What do you think my life has been? That easy?” I laughed. She apologized for making that mistake. These are the types of conversations I have with my aunt because she knows what I went through, as you will soon too.

I remember another time when one of my close friends, Marigold, and I were once talking about life. She said “I wish my life was exciting.” I remember telling her, “Well just talk to me more often! My life is so exciting! There’s always some random drama going on!” It’s the truth. I’m not your ordinary, average person. Another thing you will learn after reading through all of this.

This blog will contain not only my story, but excerpts from my life. By this, I mean that I am an avid writer. You may come across many of my actual diary/journal entries, assignments that I wrote for school, poems, lyrics, lines from my stories, etc. that I have compiled from over the years. Together, they all reflect the struggles I’ve faced in my life and complete the puzzle that represents the intricate aspects of myself. So sit back, relax, and delve into the craziness that equals my experiences and enjoy what you find. 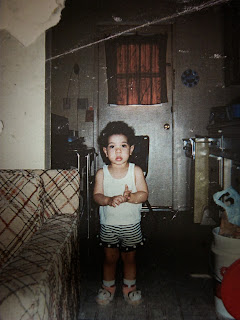 ^^^ The above image is me as a toddler. It's one of the only photographs I own of myself at such an early age.