Disclaimer: Don't assume that this post is about raunchy, passionate, sinful lust and sexuality, 'cause it's not. In fact, it's quite the opposite. It's more about the innocence of childhood. (and how it can be lost.)

I recently read the book The Five Love Languages by the renown marriage counselor Gary Chapman. In his writing, he discusses how the ways we love one another are expressed through languages, being Words of Affirmation (i.e. verbal praise, compliments, reassurance, etc.) Quality Time (self explanatory), Receiving Gifts, (not necessarily expensive jewelry, but even cards, flowers, sentimental tokens of affection which might not cost anything), Acts of Service (doing favors for each other, such as making dinner or doing the dishes), and Physical Touch (which is not necessarily sex, but hugging, kissing, holding hands, massages etc.) Chapman elucidates that we all have a primary love language in which we wish to receive love, and it is important that in a relationship, the partners are aware of each others' love language and communicate effectively in order to have a lasting, healthy, and happy commitment. It's a very eye-opening, moving, and insightful read.

I knew about the subject matter long before reading the book and took the test online to discover my own dominant love languages. 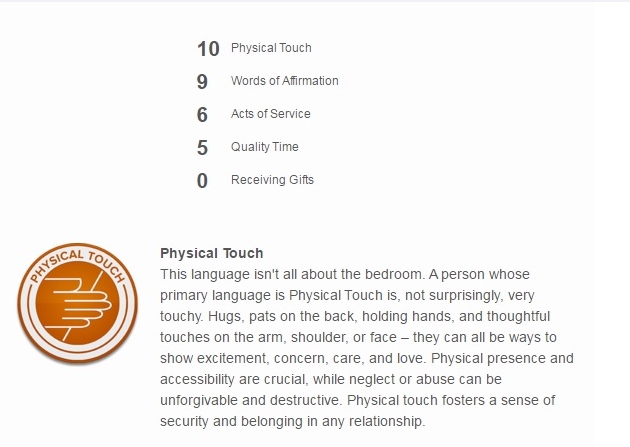 It's not a shocker that "Physical Touch" was my primary result, with "Words of Affirmation" close behind. But I would argue that "Quality Time" is also very important to me, and though I scored a 0 in "Receiving Gifts", I do enjoy receiving a nice, thoughtful, and practical gift every now and then, though it's not necessary for me to love someone.

I would also argue that our primary love languages in romantic relationships can be very different from our love languages in friendships and between family members. And we might even communicate in a way that doesn't convey our own dominant love language. For instance, with my friends and family, "Quality Time" and "Words of Affirmation" mean a lot to me. And I tend to give many small gifts to whoever I view as a close friend or relative. But either way, the book and the test are very helpful at discerning the primary way in which you accept and express love.

Gary Chapman also wrote a version of the book that discusses the love languages of children and how parents should use them in nurturing and understanding their child's needs. He touches slightly on this in his initial book.

Upon learning this, I read:

This passage resonated with me because it summarized my childhood, or the loss of one.

My mother struck me in the face so often, for the most minuscule and trivial reasons. I was slapped in the face if I spilled juice on the floor, didn't clean the house fast enough, forgot to put my toys away, refused to wear an outfit I wasn't comfortable in, asking for some candy at the grocery store, playing outside without asking permission, you name it! All I ever wanted was to impress her, make her proud of me. I made small gifts for her often. Cards with drawings, crafts, poems, I might have even saved up my allowance to go to the store an buy her a nice watch or her favorite snack. But nothing ever made a difference. I was repaid day after day with multiple slaps in the face, and now, she wonders why I no longer wish to have a relationship with her. She denies ever laying a finger on me though there are many witnesses who know otherwise.

I am currently taking a Family Violence class in my Marriage and Family Therapy Master's program, and in the textbook, Family Violence in the United States; Defining, Understanding, and Combating Abuse, I came across these questions in the chapter dedicated to "Child Maltreatment":

"[...]Must injury occur in order for a behavior to be labelled physically abusive? Is risk of injury enough? What if no physical injury occurs, but the child is slapped on a daily basis for no apparent reason?" (Hines, Malley-Morrison, and Dutton, pg. 34)

Reading this passage was eerie because it was like my mother ripped the words right off of the page. She used to often say to me, "No one abuses you here on a daily basis." as a way of justifying her actions and brainwashing me into thinking that I had never been slapped by her, her brother, or mother.

But why would someone feel the need to say that if it were true?

It is highly ironic that someone who claims to be non-threatening also used to say "Do you want me to smack you?" to a defenseless child whenever she felt disgruntled.

My answers to those above questions: No, physical injury does not have to occur for a behavior to be labelled physically abusive. Yes, risk of injury is enough. I was that child who was slapped on the face, almost daily, for no warranted reason, and let me tell you, it may not leave a noticeable mark, but the psychological scars are enough to last a lifetime.

I was severely traumatized as a child, she instilled so much fear and hurt in me that left me depressed for years and anxiety ridden, but there were some effects I didn't even recognize until more recently.

During my Junior year in high school, I remember my boyfriend at the time raised his hand to brush it against my cheek, and I immediately moved away. I flinched. My reflexes caused me to quickly back away. My best friend at the time was in the background and saw what had happened. She reassured me, "He was only trying to embrace you." I was shocked. I apologized. I hadn't even thought of that. I was so used to dodging slaps that I was fearful of my own boyfriend trying to hit me when he was only trying to greet me with a caress upon the cheek. I remember this moment like yesterday even though it was over 5 years ago.

While dating, I became so vulnerable. Whenever I received non-sexual, "Physical Touch" from men, if there was chemistry and I felt comfortable, I became obsessed. I immediately fell in love with them and became addicted. I craved more and more. And when those brief interactions ended, and I never spoke to them again, I felt abandoned and broken. I went through withdrawals. I was so deprived of proper love and affection that I sought it from strangers who ended up leaving me and damaging me even more.

I had to close myself off to shield myself from the pain of becoming close, getting attached, and losing it all, again and again. Until I found the right person, gained trust, felt safe/secure, and knew it was viable. But of course, that took time.

I'm a big girl, now. I'm a capable and successful adult. But I can't forget where I came from and who it made me. The ramifications of abuse are residual. Even though a child grows into their own person and leaves their abusers behind, the abuse itself stays with them, buries itself in the depth of their psyche and remains a part of them. So I forgive, but I do not forget. I have overcome many obstacles, but I am still healing, with time.