Thanks for checking in!

I'm soooooo sorry that I haven't been posting regularly. My schedule is still pretty chaotic, as always.

So, last quarter, I was fortunate enough to take the AH-mazing class Communication Studies 1: Principles of Oral Communication with Professor Marde Gregory, who's a phenomenon herself! She's an opinionated and experienced 66 year old lady who dresses eccentrically vibrant with gaudy, loud colors and tons of jewelry and accessories (arms covered with watches and bracelets and a neck layered in necklaces) and lives to the beat of her own drum. The woman is a GENIUS!

Anyways, she had us do 2 speeches in her class. The first one was to be 2 minutes long and it had to be about what makes us "Ordinary." Not "Different" or "Unique" or "Original", but what makes us "Ordinary" and like everyone else. All of the speeches ended up being autobiographical but still had to achieve the prompt. (this one is basically like the abridged version of my life story) Here is mine:

Speech: What’s Ordinary About Me?

Hi everyone. My name is Sky Lea Ross and I’m a 4th year Gender Studies Major.

I think what’s ordinary about me are my emotions. As humans, we all have them. But I feel that many of us choose to ignore them. We numb ourselves with alcohol, drugs, sex, food, heck, even work. But I didn’t do any of those. Though, what I did was probably just as bad.

I decided to bottle my emotions inside and hide them from everyone else as well as myself.

Let’s just say, the early stages of my life weren’t easy. As far as a childhood goes, mine never existed.

I was raised by very verbally and physically abusive as well as emotionally and financially neglectful parents.

And I still bottled up all of my feelings. And what happens when you bottle up something that’s under immense pressure and stress? It explodes. And that’s exactly what I did. I exploded.

I was suicidal starting from the age of 9 all the way through middle school and even into high school when I got put into foster care.

And it didn’t help that I was later diagnosed with PTSD and Bipolar Disorder.

But now that I’m older and I’ve had all of these experiences, I’ve become more in tune with my emotions. I have learned to release them and express them. I go to therapy regularly and I vent to my friends and family.

I’ve even learned how to channel my feelings into creative energy. I’ve written over 70 songs, 30 of which are finished, they just need to be recorded. Over 90 poems, over 20 short stories and I’m currently working on 4 novels, one of which will be my autobiography.

So, I challenge you all to express yourselves! Release your emotions! Don’t ignore them, distract yourself from them or hide from them. Just be open to embracing them.

As my awesome mentor, Ariel Penn, who is also a UCLA alumnus, always says, “Feel your feelings. They can become a catalyst for positive action.”

I never knew I had a knack for public speaking, but my first speech in this class was really well received and Professor Gregory immediately named me among the top 3 speakers in the class. I got tons of praise and constructive feedback from my classmates and was ready to go on to the final stage.

Right before that, however, I came down with a fever of 101.6 degrees for 4 consecutive days and was worried, so I went to the nearest Urgent Care and they diagnosed me with Bronchitis. This came from out of the blue, I was not expecting to be sick at all, but it's no surprise. I grew up with heavy second hand smoking that severely damaged my immune system and I was actually grateful to have received this diagnosis since I feel that this is something I have always had to deal with. I've always had lung problems and I was glad that someone finally recognized this and gave me an inhaler to help resolve it.

Anyways, because of the Bronchitis, I was out for 2 weeks straight! I missed all of my classes and I wouldn't have eaten if it weren't for my lovely staff of RAs who came to my room to deliver food and kind words. Thank goodness they exist! 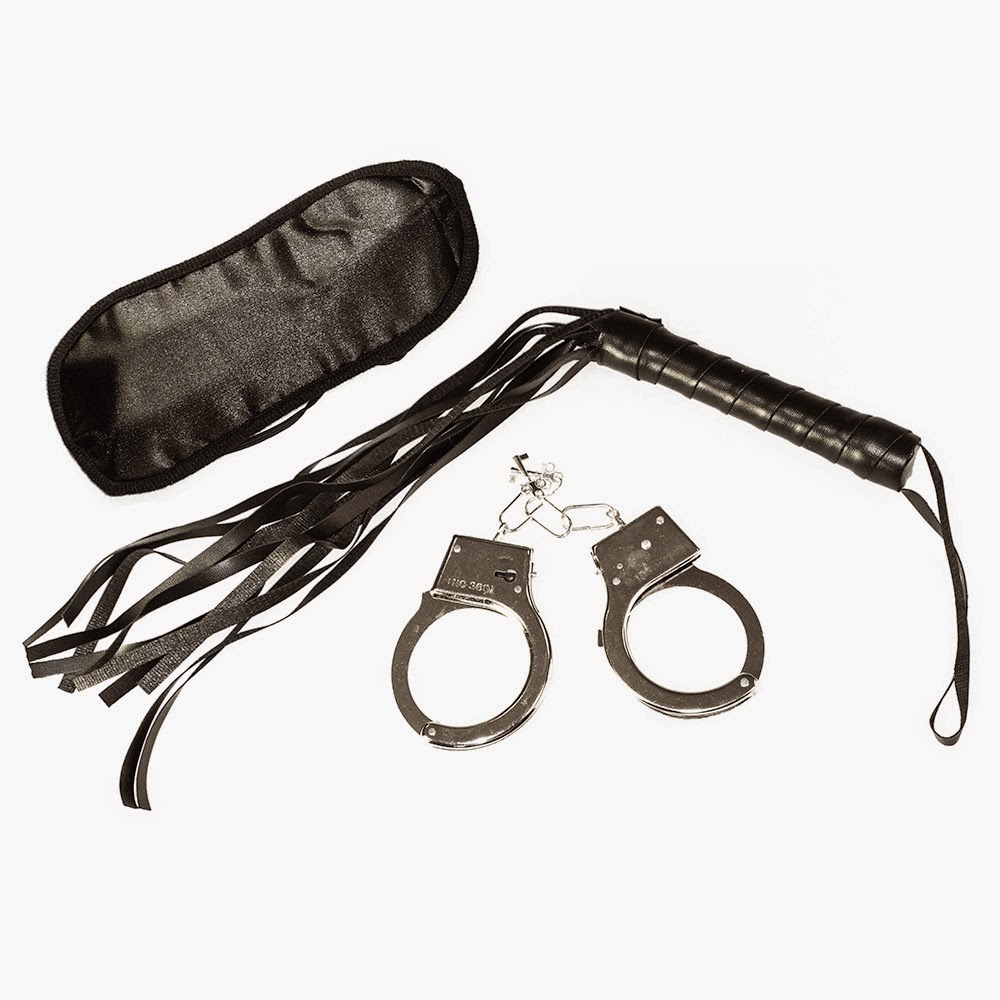 For the last two weeks as I was suffering with Bronchitis, I emailed both Marde and Arash and asked them to fill me in on what I missed and to tell me what exactly the final entailed. They both pretty much told me that the prompt was to discuss something controversial, provocative or to teach everyone something new.

Bondage is pretty self-explanatory. It’s the act of tying up or being tied up. This can be done with rope, chains, sheets, hand-cuffs, or anything you have handy.

Sadism and Masochism are where it gets a little more complex.

The word “Sadistic” tends to have a very negative connotation. People use it when they're referring to Hitler and they might say things like “oh, that person is sadistic, they’re evil, they enjoy causing others pain and making them miserable.”

As some of you may already know, Masochists are those who enjoy receiving pain.

Skin Piercing with needles or other sharp objects,

Electric shocks, which are rare

And Body Branding, which may be done with hot candle wax or other hot objects.

You’re probably wondering, “Why does Sky care about this? Who gives a crap?” But I care for 2 reasons:

1) As I’ve said before, I am an adamant Gender Studies Major and a Feminist, and I feel that people should be free to express themselves sexually in healthy ways.

So, my main point here is that humans are so quick to judge, and find fear, hate, or become disgusted by things that we don’t understand or aren’t knowledgeable about.

After I gave this speech, the room was filled with a loud applause and my Professor was in utter shock. She was speechless for a few minutes (ironically) and then gave me an earful about how much she loved it! 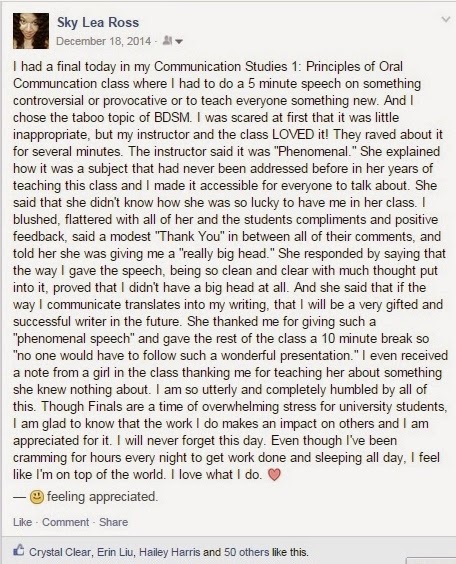 And I passed that class (along with the rest) with flying colors! 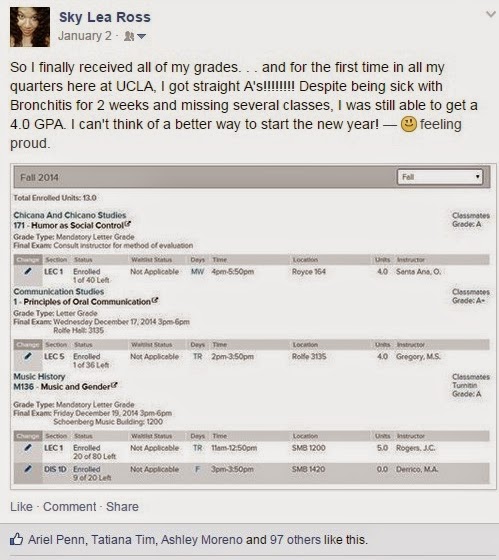