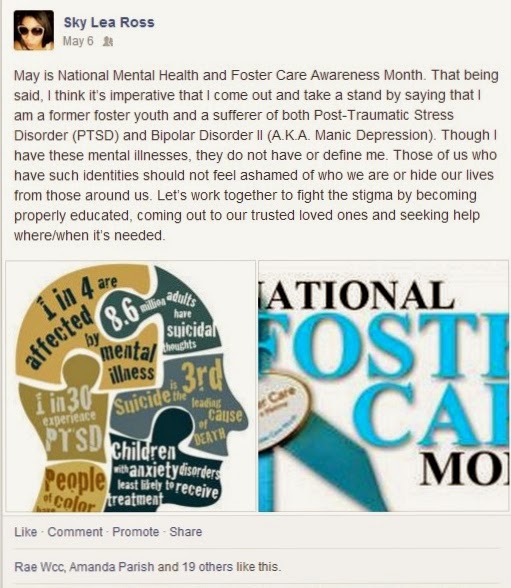 Mental illness is so often criminalized and villianized. Just look at the UCSB shooter we had last weekend. The media is already calling him "mentally disturbed" even though there's a much bigger issue at fault here: ingrained misogyny.


(^^^For more info on misogyny extremism, watch this video above^^^)

But that's not what I'm writing this post about. I'm writing about the myths associated with mental illness.

This past weekend, my father happened to be in town and visited my deranged (and estranged, rhyme intended) mother, and because her and I had a dispute a few weeks ago, it slipped out of my mouth that I have a mental illness and that I'm Bipolar and a sufferer of PTSD as well. I didn't mean to tell my mom, she's ridden with undiagnosed and untreated conditions herself (and she's the reason why I got put into foster care in the first place), and I knew she would blow the news out of proportion, but she made me angry while we talked over the phone because she consistently denied that the years of abuse she put me through ever happened and said that I must be "making them up", "making a false reality." So my shit hit the fan and the secret swept out, and now she has the notion that I'm on medication, which nobody told her! The truth is, I AM ON MEDICATION, because it's very important that someone like myself gets help, stays medicated, and seeks professional therapy and support from others, but these are things my mother will NEVER understand.

Anyways, where I was going with all of this: While my father was in town visiting my mother, she had the nerve to say, "If Sky is taking medication, she's going to end up like the UCSB shooter!"

This is the exact kind of statement I am trying to combat.

See, we constantly frame those who are mentally ill as "mad men" (and women) or monsters, psychopaths, or the most commonly used one of all, as "crazy", when this is not true.


May is Mental Health Awareness Month, so I think it’s time to set the records straight! Here are some common myths about mental health and what the truth really is:
1. Having a mental illness/disorder makes you ‘crazy.’
Having a mental illness/disorder does NOT make you “crazy.” What it does make you is vulnerable. Having a mental illness means that you have chemical imbalances in your brain that might alter your thinking, destabilize your moods, or skew your perception of reality to a degree, but that doesn’t make you crazy! It makes you human! And with proper treatment, you can be as sane as anyone!
2. People with mental illness are violent & dangerous.
Within the last few years, we have had an increase in terrorist attacks and mass violence. Whenever these disasters take place, the media is quick to judge the suspects and label them as “mentally disturbed”, which is rather inaccurate. In reality, only 3-5% of violent crimes in the U.S. are committed by persons who suffer from a mental illness (Reference: Iva Cheung, “Sanism and the Language of Mental Illness” 2015)

The unfortunate truth is that individuals with mental illness are MORE likely to be victims of violence than perpetrators. Disorders like Depression, Borderline Personality Disorder, and Bipolar Disorder make sufferers more inclined to inflict self-harm than to harm another person. You have no need to fear a person with a mental illness just because of their diagnosis.
3. People with Bipolar Disorder are moody.
Bipolar Disorder (specifically) does NOT necessarily equate to having intense mood swings.
People so often throw around the term “bipolar” to describe California weather. When they say this, it downplays the seriousness of the condition and creates misinformation about what Bipolar disorder actually is.  They are referring to rapid changes, and Bipolar Disorder doesn’t always work like this for everyone who has it.
What Bipolar Disorder DOES do is cause you to have episodes (or periods of time) where you might experience mania (high energy, rampant thoughts, inability to sleep, grandiose ideas or perspectives, etc.) and depressive states (the opposite, feeling very sluggish, sad, suicidal, etc.) These extreme highs and lows take turns, but do not necessarily appear and disappear within the same moment.
4. Post-Traumatic Stress Disorder is only a military man’s (veteran’s) disease.
PTSD (specifically) is NOT just a military man’s disease.
ANYONE can suffer from PTSD. A rape or sexual assault victim, a domestic abuse victim, a survivor of a natural disaster, someone who’s suffered a loss, or even a person who did not face any violence or physical threats themselves directly, but happened to witness someone else who did (i.e vicarious trauma). The symptoms include having flashbacks of that event or events, nightmares/night terrors, anxiety/panic attacks, onsets of depression, reacting in a way as if the event is re-occurring, etc.
And don’t believe all of the movies in which a person supposedly has PTSD. As a sufferer myself, I honestly think that super hero movies, (like Iron Man 3, The Incredible Hulk, etc.) are better depictions of the disorder than other films out there, and that’s a little pathetic if you ask me!
5. Psychiatric medications ("psych meds") are bad.
People often tend to believe that psychiatric medicine is harmful or bad. That, or they believe that "psych meds" are simply “happy pills” and “an easy way out” for those with mental illness to avoid dealing with their problems. Again, this is simply not true.

Just like any other detrimental medical condition, mental illness is still an illness. For many mental disorders, medication is necessary, just like it would be for a Diabetic taking Insulin. For some individuals with mental illness, medication is needed for survival. (myself included) For others, like those suffering from mild to moderate Depression, Anxiety, or ADHD (for instance) medication can help ease symptoms quite a bit so that they can function normally. And having personal Therapy alongside taking prescribed medication regularly can greatly improve one’s quality of life.
6. Seeking help for such disorders will lead to being ostracized by one’s community/loved ones and make symptoms worse.
Seeking help for such disorders will and should NOT lead to being ostracized by one’s community/loved ones nor should it make symptoms worse.

I know it’s hard (really hard) to come out to anyone about possibly having a mental disorder, especially because they’re so commonly misunderstood and people who are uneducated tend to think that people are the way they are because of nature, personality, or attitude. But when you do have the strength, courage, and bravery to open up to someone else, you are working to alleviate the stigma, increase awareness, empower yourself, grow as a person, become well, and promote understanding of mental health! So don’t let being (or seeming) vulnerable, irrational, or “crazy” scare you from getting the help you need and correcting society’s false impressions and preconceived notions.
It’s important that we do our part to protect ourselves and others from the hell that mental illnesses can put us through, become autonomous and prevent societal constructs from framing people as criminals and psychos for having something they cannot control without the proper intervention.

Fun Fact: The stigma associated with mental illness is called Sanism. Just like Racism or Sexism, it is a form of oppression and discrimination. Let’s try our best to become educated and eradicate it!

Another Fun Fact: There is also a thing called the “Mad Pride Movement.” Just like the wonders of “Gay Pride”, those with mental health issues are a closeted population. It’s time we come out and stop being ashamed of who we are! 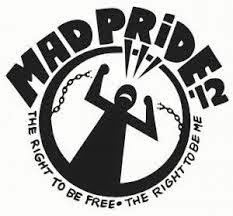 Sorry this was sooo late coming! As always, thanks for reading. =)
Posted by Sky Lea Ross at 11:38 PM